Finally the Sky Gods have looked favourable upon us and we had our first session back at Katoomba Airfield in many months.

The Airfield was spared the torture that was the recent bushfires that ravaged much of the surrounding national parks.  So with the recent rains the Airfield was looking the greenest I can remember and the wildflowers are starting to bloom.  We even saw our first every kangaroo here this night, something that we have never seen in the 13 years we have been using the site.

The night was spectacular.  Clear, with a nice breeze blowing to keep our gear dry from dew.  Seeing conditions were good, though transparency tonight was a little down.  But hey, after so many months without getting out under the stars, I am not complaining.

It was also a Club meet session of the Blue Mountains Astronomical Club, of which I am the President.  The current Covid-19 situation has limited who can attend Club sessions, but the turnout was still a very good one.

I managed three sketches this night.  Two of objects I had never seen before, and all of different types of objects.

Earlier this year I did a planetary marathon from my home in Sydney during the Covid-19 lockdown we had.  I was surprised at how many planetary nebulae I was able to see from home.  This experience left me quite fond of the objects, and I was keen to put pencil to paper with one this night.

The Skull Nebula was the very first object I looked up after setting up.  I was using my 17.5" dob with a 13mm eyepiece, and I remember my first reaction on seeing The Skull:  "Oh, my! That is big and bright!"

The skull-like appearance I cannot really say I could make out, which I guess is due to the transparency not being 10/10 - viewing other objects during the night confirmed transparency could be better.  All the same this planetary nebula is quite striking it the detail is presents.  Its outer edge ring is disrupted along one side, and internally it has a distinct mottled appearance. 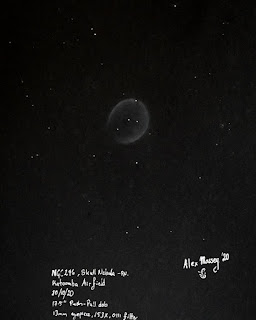 This time of year is prime galaxy hunting time.  There is multitude of galaxy clusters, with the main one in this part of the sky being around the constellation Fornax.  I sketched the gorgeous spiral NGC 1365 a few years back.  NGC 1097 is larger in size, but of lower surface brightness, so is less well known.  Both of these galaxies are barred spirals, but they are so different in morphology.  The bar in 1365 is short and its arms come out perpendicular from the bar.  1097 has a very long bar by comparison, and the arms wrap tight around the galaxy.

I looked at both galaxies this night too.  I was struggling to see the arms in 1097, so I chased down it brother, and noticed that it too was not as easy to see as previous times.  Again this being due to transparency not been at its best.  All the same this presented its own challenge to be able to make out as much detail as I could in the prevailing conditions.  I will like to revisit 1097 under better transparency and resketch it to have a way of comparing how transparency affects viewing.  The difficult transparency made it a challenge to be able to pull the detail of the arms, needing observing every trick I had to tease what little detail there was.

1097 also has a couple of companion galaxies, with 1097A being the easier one to see.  It appears the small attached blob at the end of the top bar in the sketch. 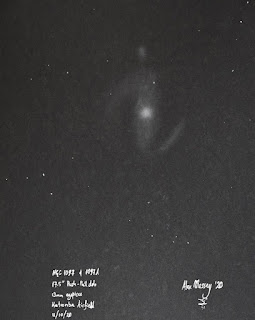 It is curious how some constellations a devoid of many deep sky objects, yet others have so many showpiece objects.  And the problem with having so many outstanding objects is many go totally unnoticed because.  Carina is one such "greedy" constellation.  Everyone knows of Eta Carina, but who knows of any other deep sky objects in it???

In any other constellation globular cluster NGC 2808 would be a showpiece object on its own.

This magnitude 6.2 beast is also a wolf in sheep's clothing.  It is one of the largest globular clusters of the Milky Way, harbouring a blackhole at its core, with more than a million stars in its harem.

I have been familiar with 2808 for a long time.  It is a stunning globular, with an appearance very similar to 47 Tuc of having a very intense core, I would say its core is larger than 47 Tuc's, and a very large halo that slowly peters out, making its size larger than one imagines at first - this I noticed as a spent more and more time with it, as I gradually saw its halo of pinpoint stars extending further and further out.  2808 also sits on the edge of the Milky Way to us, so it also has a very busy surrounding starfield.

I am glad I was able to finally lay down NGC 2808 on paper.  It was a challenging globular to sketch for despite the myriad of resolved stars it has and the busy surrounds, there are actually very few stand out individual bright stars in the field of view.  It made me have to carefully consider how I went about doing the sketch, and made it a difficult but enjoyable task to pull out the signature patterns.

Media:  White soft pastel and white get pen on A4 size black paper 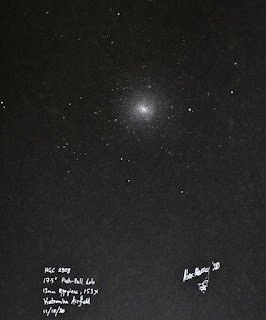 The next Club session is set down for this coming Saturday, the 17th of October.  The forecast six days out is not too promising.  But a lot can happen between now and then.  PLUS there is also Mars to pay attention to over the next few weeks.

Posted by Alexander Massey at 14:22