Sunrise & Sunset over the Straight Wall

The weather here in Sydney has been rather miserable for astronomy.  So this post is something I’ve been wanting to do for some time, show how the angle of incoming sunlight can totally change the appearance of otherwise familiar features.

The straight wall is one of the most striking features outside of its innumerable craters.  Astonishingly long and straight, this 110km long Faultline escarpment is surprisingly only 300m tall at its highest. 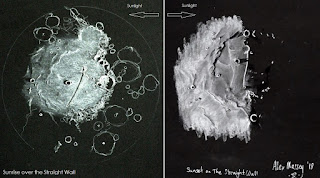 By far the most frequently seen images of Rupes Recta is during sunrise over it when its dark shadow marks out is location on the eastern section of Mare Nubium.  The lunar landscape is very well known, although less well known are the two domes that sit on the northern end of the smaller Rima Birt, Birt 1 & Birt 2.  There is a twist to this familiar moonscape – viewing it during sunset. 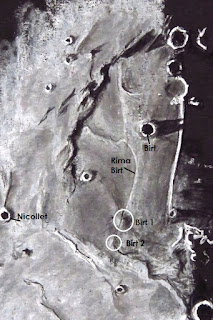 The shadows on the plain are different, showing an unfamiliar perspective around what otherwise are familiar features of craters and rilles.  And the appearance of the Straight Wall is not a dark shadows but a brilliant white.

I was very surprised to see such a different set of shadows on the plain surrounding the Straight Wall.  Admittedly sunlight was at a shallower angle.  All the same, the distinct play of textures and landscape was unexpected.

Even the Straight Wall itself shows interesting shadows, giving insight to the different angles at which surrounding planes that form the fault are set at.

Posted by Alexander Massey at 09:03