We have had a run of very clear, but very cold, nights here in Sydney.  A fantastic cold front swept in over the weekend dumping snow down to 800m in the mountains to Sydney’s west.  This has also meant that transparency has been excellent along with very good seeing conditions.

Last night while scanning the terminator (the area of the Moon where the light and dark meet, NOT a homicidal robot…) and came across a huge feature that I had never seen before – an enormous round blister of a dome smack on a seemingly featureless Mare!

Lunar domes are volcanic features.  Some of these are magma displacements that had pushed up from below the lunar surface but did not breach the surface.  Others are actual volcanos.  The “Valentine Dome” is a volcano.

It gets its nickname from being a little heart shaped.  I did not give it this nickname!  I found it while researching this feature after I sketched it.  Who says astronomers are not romantic?!

The Valentine dome is some 35km in diameter, but only 300 meters tall.  For this reason it requires the Sun to be at a very shallow angle for the low mound to be visible.  It is a very short volcano because lunar volcanoes are shield type volcanoes, just like the ones on Hawaii.

Its official lunar designation is Linne A 1.  The “1” refers to it being a volcanic feature, with volcanic features having numerals in the same way that lesser craters have letters.

Conversely, crater Linne is a relatively young feature.  Though small (3km), its collar of ejecta material is still very bright.  As time wears on, the solar wind will weather this bright material until it loses its brilliance and the bright collar fades to blend into the surrounding grey material.  There are other craters in this sketch that are larger than Linne.  Linne A, B & F are all larger than the principal (4km, 5km & 5km respectively).  But all of these have lost their bright ejecta collars, hence giving  clues to the relative ages of these features, volcanic and crater.

It was a thrill to chance upon this lunar feature.  It was also the first lunar volcano that I was able to show my wife as it was so distinct and free from other distracting features.  I hope you are able to find it for yourself one day. 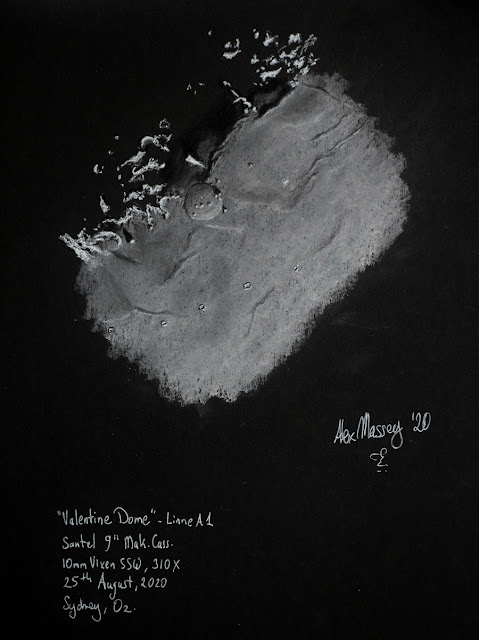 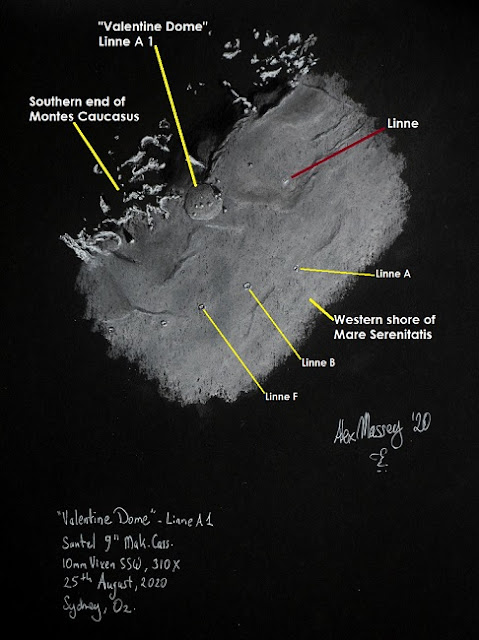 Posted by Alexander Massey at 09:04