These two works deal with DEATH.  The death of stars.

It also deals with looking to make the most of observing from under light polluted skies, pushing equipment and eyes.

Because I was not able to travel to my customary dark sky site, I was still itching to get some time under the stars with Deep Sky Objects.  Then the idea came to me of doing a Planetary Nebula marathon of how many I could see and sketch from my home in Sydney.

Inspiration for these two works came from two friends soon after the start of the Covid-19 lockdown that took place here in Sydney earlier this year.  One friend was testing some equipment using planetary nebulae, and the other friend had done a series of astro sketches who was also stuck at home at the time.  The idea then occurred to me that there actually are many planetary nebulae that are visible from under light polluted skies, and as a challenge to myself why not try to sketch as many of them as I could as these are relatively simple objects to sketch.

A planetary nebula is the last death throes of a star like our Sun! Our Sun is not large enough to explode in a supernova. Instead when it has exhausted its hydrogen fuel, the star/Sun will have series of "burps" where it will shed all its layers except for its core. The material that is released puffs out to form a sort of cosmic bubble that is called a planetary nebula. These are short lived bubbles, eventually expanding like a smoke ring into nothing, leaving behind the exposed core of the star/Sun that will slowly cool like a cinder, eventually after many billions of years just stop shining and be as black and cold as coal. No more star, no more Sun.

And there are hundreds of these cosmic bubbles all around us! The two sketches below are of the brighter ones I could spy out in one night from my home starting from 7pm through to 5am the next morning, over two successive nights. If I had been out bush to do this piece, I would have been able to spy out dozens more.

The different shapes that can be seen is due to various gravitational and magnetic influences on the expanding material from an invisible companion star (if the shape is not an even bubble), or if it is a smooth round bubble, then the star has no companion star (like our Sun). The shape of a planetary nebula can actually reveal A LOT about it!

So, if you are stuck at home, have a telescope but don't know what to look for, chasing dying stars (planetary nebulae) is something a little different and certainly possible from under light polluted skies. A few of these are surprisingly bight. Most are dim. Some are very dim and will really challenge your observing skills. And of course, they vary in size from large (only one or two like that in the sky), down to stellar-like and everything in between. Spotting the tiny stellar-like ones is its own challenge best done using a "blinking paddle" to hold an OIII filter, but this is beyond this post.

The position of the nebula in each individual sketch I tried to position so to make the composition a little more interesting by trying to accommodate as many stars as I could that surrounds each nebula within the field of view of the scope.

For what it is worth, I used a 9" Maksutov telescope, most at 258X with a 12mm Vixen SLV eyepiece, and an OIII filter.  Four individual nebulae I used different eyepieces as they needed different magnification of field of view to provide the best quality of image for that planetary nebula. The sketches were done on A3 sheet of black paper using white and blue soft pastels. Each individual sketch took approx 20 minutes to half an hour. 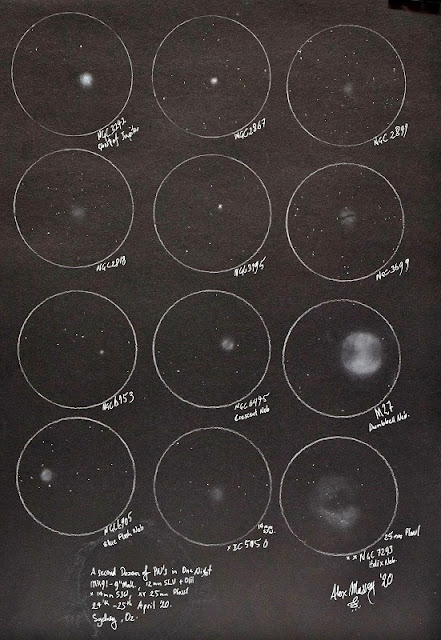 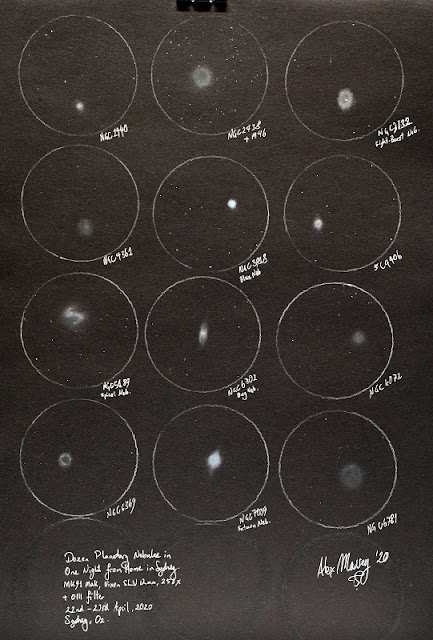 Posted by Alexander Massey at 14:35