This particular lunar eclipse presented a unique opportunity – to see the eclipsed Moon set behind the Sydney skyline.

It required some investigating to work out the best vantage points.  The angle of the line of sight window was a small one, and the landscape of Sydney’s east is also very hilly, AND the harbour also presents its own points and islands that can present obstacles.  What I wanted was a vantage point that allowed for a good view from the Harbour Bridge in the north and the city’s CBD to the South,

I could have the Moon set behind the gorgeous harbour bridge, but vantage points for this were limited and would mean being too close to the city for the sort of image I was after.

The area between the Bridge and the CBD is rather empty so I preferred not to have the Moon set here.

A vantage point was needed that would have the Moon set behind the CBD, and with any luck, it will set very close to Sydney’s tallest building, Centerpoint Tower.

So, at 4am I found myself on the foreshore of Sydney Harbour in the grounds of Strickland House.  Stickland House is a beautiful manor built more than 150 years ago, and has a gunbarrel view of the City down the harbour.   From here I had an uninterrupted view of the City skyline.  There was a risk that predicted cloud cover could ruin the event, but this only made things more interesting with an element of risk.

The photographic camera I have is not designed for long exposure work, so my intention was not to capture a textbook pretty photo of the blood red Moon.  But I brought it with me for the odd chance that I could manage a photo of the eclipsed Moon, but more for photographing the spectacular skyline at sunrise.   My main tools for the event was a modest Brinno time lapse camera, a sketch pad, oil pastels and binoculars.  I’d be happy with a nice little time lapse video, and a sketch of the event which would be a very different way to present the lunar eclipse.

As the eclipse progressed, I still hadn’t worked out what to do sketch wise.  Then it hit me – I have a gorgeous skyline in front of me, and why not a sketched time lapse too!?  I had done a sketched time lapse of Comet Lovejoy a few years back, so not a new concept to me.  What made it even more appealing to me was the changing appearance of the red illumination of the Moon as it progressed through Earth’s shadow.  The threatening cloud sitting behind the skyline would also add to the complexity of the sketch and add to the movement of the final piece.

I was not alone at the foreshore vantage point I set up on.  When I arrived a met three mates there who are photographers.  I set up next to Dan Chee from Delta Charlie Images ( https://www.facebook.com/DeltaCharlieImages/ ).  Dan’s welcoming nature made the cold so much more bearable, and with his mates for a very jolly one too!  Dan posted his spectacular images of the eclipse on his Facebook page.

The time lapse sketch also shows Mars which was just a little to the left and above the Moon.  This is why there are only three apparitions of Mars despite there being four of the Moon.  The two streaky lines are of a couple of planes that crossed through the field. 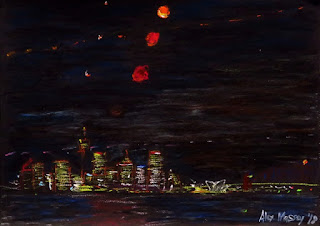 As I had to wait for some time between each new position of the Moon in my time lapse sketch, I passed some of this time by doing a quick oil pastel sketch of the blood red Moon as viewed through my binoculars.  What made the apparition  so interesting was the difference of the density of the red across the Moon as it transited through Earth’s shadow.  It gave a wonderful range of hues across the lunar surface, and this suited very nicely the brisk sketching form in using oil pastels.  Oil pastels are not a medium for very detailed work.  They are an excellent medium for a fast Impressionist style of sketching. 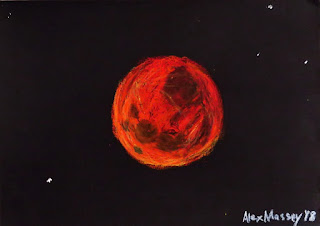 I’m also pretty happy with the modest little time lapse video of the eclipsed Moon.  Mars is also very easy to see.  The Moon makes its last apparition around the 57 second mark at it comes in very close to Centrepoint Tower.  And of course I forgot the camera was rolling towards the end of the filming.  Well, it was very cold by the end and I wasn’t thinking too straight! LOL

I hope you have enjoyed my little collection of images of this lunar eclipse.  To finish off, I’ve included a couple of photos I took of the skyline of my home city as the Sun began to rise. 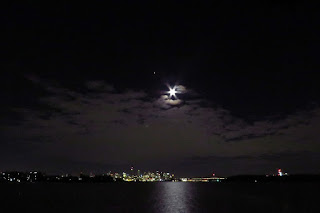 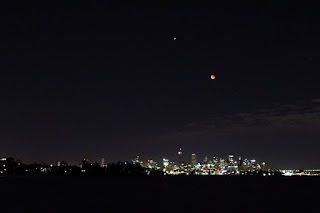 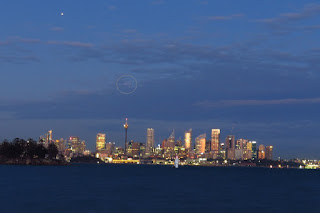 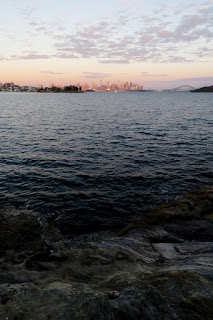 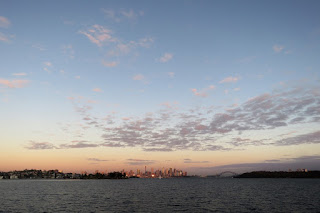 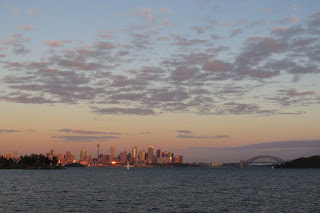 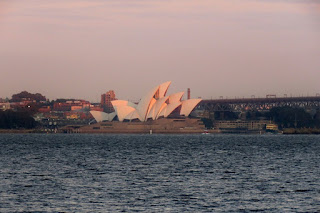 Posted by Alexander Massey at 10:37