Unique Planetary Alignment coming up in October this year!

I've happened to have stumbled upon a very unique planetary alignment that will occur for a few days either side of October 18 this year!  All 8 planets, plus the Moon and Pluto will all be visible all at the same time.  This is one of the rarest planetary alignments visible!

Over the last few months I've started doing some sidewalk astronomy sessions, taking a telescope or two down to a popular spot along Coogee Beach near my home, and show people who are passing by a look at the Moon and any planets that happen to be visible on the night.  These sessions have been very popular with some people even calling their families and friends out from their warm homes to rush down to have a look at the Moon, Jupiter and Saturn! 😊

So, early this week I was doing some research for some future dates using an astronomy app that would be favourable in showing the Moon and planets when I notices something very interesting in October.  On the western horizon Mercury, Venus and Jupiter were all close together  soon after sunset.  It then occurred to me that Uranus might be up at that time as I was aware of its location in the sky.  Well, wouldn't you know it!  I shuffled the screen to show the eastern horizon, and there was Uranus!

This means that for a few days either side of October 18, ALL 8 planets, PLUS the Moon and Pluto will all be visible in the sky simultaneously!  All be it for only a few minutes, but all the major bodies in our solar system will all be visible at one time, and visible telescopically all within a couple of hours after sunset.  And from what I've been able to gather, this event has been totally missed by all major astronomical organizations.

This is an extremely rare event.  With the current position of the planets in their orbits, this whole of solar system event will occur on three separate occasions:

1st event will happen mid-October this year just after sunset, 2018.

3rd event will happen late October and into early November next year, 2019, again just after sunset.

Then that's it for a few hundred years!

Below are two screenshots from the Sky Safari app of the October 2018 event, with the location being from my home here in Sydney.  Please note that the screenshots below are for SYDNEY.  You will need to make the necessary adjustments for time immediately after sunset for your location. 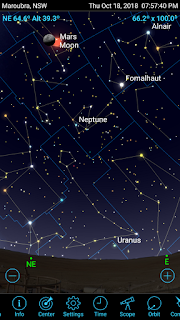 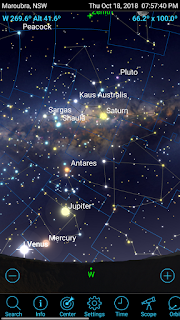 Below is an image showing the relative positions of the planets at this time when viewed from above the ecliptic. 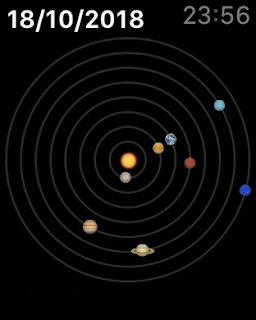 I will be endevouring to make a special occasion of this.  I'll be trying to organize some of my friends to join me with a few scopes to put on a planetary marathon, or a "Solar System Sprint" to bag all the major bodies in our solar system as quickly as possible, and to show all of these bodies to the general public.  I now have a reason to make an effort to chase down Pluto as well!  Prior to knowing about this event I've never had any interest to try to identify Pluto.  After all, it will only appear as a faint star in a field of other faint stars.  This very rare even now changes all of this!  I'll be starting to make observations with my 17.5" dob on a monthly basis of the area that Pluto sits in in order to pinpoint it by its movement against the background stars.  I'll also be doing this photographically from home as I doubt I'll be able to spot Pluto from my home because of light pollution.  It won't stop me from trying though.  I've already identified a magnitude 14 star that is easy to identify, and I have already pinned it with my video astronomy rig from home.  So I know Pluto with within reach of my video astronomy gear from my home.  If I am able to spot this same star with my 17.5" dob, then I know that Pluto is cooked!

Now, fingers crossed for a clear clear night some time on these dates! 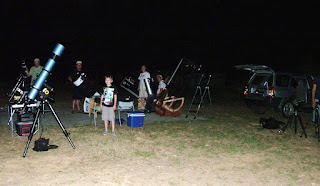 Hopefully, you will be able to also enjoy this unique celestial event and attempt your own Solar System Sprint!

Alex.
Posted by Alexander Massey at 16:59