An extraordinary two days with the Sun

I had the opportunity of some time with the Sun over two days.  And a most extraordinary shows the Sun put up on these two occasions!

On the 29th of January, there was a tremendous amount of prominence activity visible, two distinct sunspot areas, and a lot of filaments and plages.  It really was a smorgasbord of features to choose from.

I settled on a quadrant that had a wonderful assortment of prominences and a sunspot region that was very close to this limb.  Littering this limb were spicules, inclined proms, broken arch proms, tree proms (which are pyramid proms that have been displaced laterally), and mound proms.  It was quite a rich display of prominence varieties.

The sunspot that was close by was surrounded by an amazing amount of filaments and plages.  The more I looked, the more detail I could make out.  It was an exercise in throwing around different eyepieces and stopping down the aperture to find the best combination of EP, scope and Quark that brought out the best results.  And with conditions being quite reasonable for mid-summer, it was a fabulous chance to push the Quark filter.

A hero that popped up was a 13mm Hyperion eyepiece that I haven’t used for some time.  I’ve modified it to make it a better optical match with my fast Newtonians by swapping its Smythe field lens with a barlow.  Works very well this way.  But with the swapping of field lens, there is a change in focal length, closer to 17mm, and a wider AFOV over 70°.  I considered using it with my Quark as I remembered that it is possible to remove the field lens altogether and you end up with another eyepiece, in this case a 23mm eyepiece.  I ended up swapping between the two focal lengths of this Hyperion eyepiece. 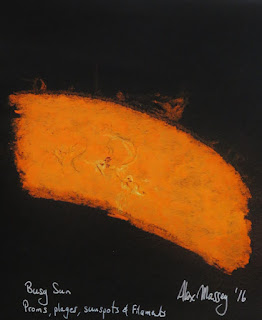 The second chance came on the last day of January.  The forecast was for overcast conditions, but it unexpectedly cleared up.  So, quickly grab the scope and Quark!

WOW!  What an apparition was waiting for me – a HUGE Coronal Mass Ejection (CME) was hovering just apparently detached from the surface!

I have been wanting to view one of these spectacular ejections, but it was always going to be a lottery, pot luck, chance, fluke, culo, or just plain lucky to see one.  And it happened!

Adding to the spectacle was a variety of prominences.

The CME was floating above the surface, being held in place and pushed and pulled by enormous magnetic fields.  Streamers of plasma swirled, plunged and soared right before my eyes.  This feature was changing so quickly.

I ran inside to call the kids out to have a look.  The first remark from each was ‘WOW!’.  I told them to slow down and take their time, and they also saw the streamers of material shooting around.  I got as much a buzz from their excitement as I did from the view from the eyepiece.

What is staggering is when one begins to fathom the distances being covered by this material, it is truly astonishing. 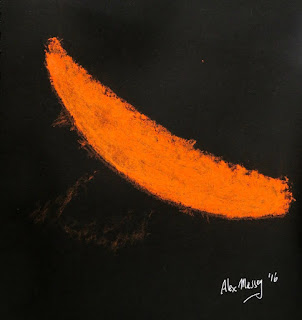 I hope you enjoy these pieces.

Posted by Alexander Massey at 19:58