Finally, a clear dark site night!  And I got to spend it with my best mate – my son!

We headed up to Katoomba Airfield on Sunday afternoon.  The clear sky over Sydney started to cloud over to thunder clouds the higher up the range we got.  But this was a typical afternoon storm that often happens in summer, rips in, pours, blows and roars, and is all over in 5 min.  And the rest of the evening is crystal clear.

My son had his little 114mm scope that I made a table top dobbie mount for.  With a stable mount, as a first telescope it is a fantastic little instrument for a child.  He quickly got the hang of using both eyes when using the red dot finder, and revelled in bringing up a target and telling me he found it so quickly. 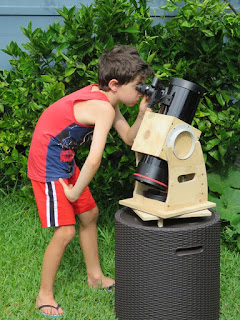 His nine years struggle with the sheer size of the numbers involved with light years, and the concept of hundreds of thousands of years, and millions of years it takes for light to cover such vast distances.  His immediate world revolves around moments and hours through to agonizing days.  But 50 million years, well, most people struggle with that one…

His nine year old eyes also put my eyes to shame.  He counted 8 stars in the Pleiades naked eye!  I can only see 6.  And didn’t he take glee in that!!!

But he is still only nine, and the Sandman finally wore him out.  Then it was my time to play…

Conditions were not crash hot.  Seeing was only so-so, and transparency was challenged with the high humidity due to a long spell of recent wet weather.  What to sketch in these conditions was a task.  The Horsehead nebula was visible, but with the poor transparency it was not as distinct as it can be.  And other objects I considered would take too long and I was feeling fatigued after a long day.

Then a memory came to me of a photo I had seen in an astro shop in Sydney over a year ago of a beautiful galaxy, taken by a customer of the store.  The spectacular ‘Meathook’ galaxy in Volans.  This was the inspiration I required! It is an intriguing barred spiral with its arms tidally disrupted by an encounter with another galaxy a long time ago.  And these disrupted arms can be seen in a telescope of sufficient aperture.  Being located so far south, it has missed being place in the Arp catalogue of unusual galaxies, where it would most certainly be better known and explored.

The Meathook has a curious two consecutive NGC number designation, 2442 & 2443.  This comes from its discoverer, John Herschel, seeing its curious asymmetrical shape and believing it to be two separate nebulae.  We take it for granted today what galaxies are, but before the 1920’s, galaxies were thought to be nebulae.  The concept of galaxies being islands of billions of stars is a relatively recent one.  So the Meathook gives us a unique insight to what the universe was thought to be and the evolution of astronomy as a science.

This Sunday night, with the less than ideal conditions, the Meathook demanded all my observational experience, all my observing tricks, and a plunge into my eyepiece kit to find that one eyepiece that would give me the best visual image.

As all my dobs are push-pull, I was constantly nudging the 17.5” beast at 200X magnification.  This was a good thing, as this had my eyes constantly being refreshed by the moving image, making visible those faintest of details that a static image loses.

It was great to be able to land a galaxy that I was introduced to by a photo a year before.  And the image of the photo matched the spectacular appearance in the eyepiece. 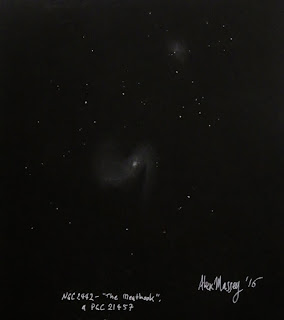 The second sketch I managed also had the same set of inspiration and experience ingredients.  When I completed the sketch of the Meathook, the memory of a correspondence with a fellow amateur, Glen Cozens, was triggered.  Glen has a particular interest with the 19th century astronomer James Dunlop, who discovered hundreds of objects in the early 19th century from Parramatta, now a western suburb of Sydney.  Today, his work is commemorated with the listing of his discoveries as the ‘Dunlop Objects’.  I had asked Glen which of the Dunlop objects was his favourites, and I remembered he replied that NGC 1313 was one of them.

Dunlop 28 (its Dunlop designation) is a face-on spiral galaxy that is also known as a ‘starburst galaxy’.  This is because of the enormous amount of H2 regions that has been triggered caused by a recent encounter with another galaxy.  The gravitational tidal forces at play from this encounter has triggered a huge amount of star formation from the hydrogen gas and dust within the galaxy.  The gravitational tugs and pulls caused this gas and dust to become compressed.  This compression means an increase in mass density, and conversely an increase in the gravitational pull of these fronts, so attracting more gas and dust to the front, and eventually causing this gas and dust to coalesce into stellar formation regions, seen as bright pink areas in photographs of 1313.

The Large Magellanic Cloud is another starburst galaxy, whose massive stellar formation activity has been triggered by the gravitational influence of our Milky Way galaxy on this dwarf barred spiral galaxy.

The gravitational interruption it experienced long ago is seen by the irregular arm structure the galaxy has as it slowly recovers from this interruption.  As a result 1313 in my scope has a blotchy appearance.  These bright blotches are huge glowing h2 regions where a massive amount of star formation is happening.  Unlike most other barred spirals, 1313 also has a bright diffuse disk that fills in between its two main arms.  Stable barred spirals show next to no disk between the arms as material has been cleaned up into a more structured shape.  Adding to the allure of 1313 is that a faint spur can be seen coming off one of the arms, which points away from the disk, somewhat like a tag.   Recent ESO wide field photographs of 1313 show a massive amount of material that extends well beyond what we see as the disk.  This material more than triples the angular size of 1313!  The ‘spur’ that I saw in my scope is the brightest section of material that extends well beyond the immediate disk. 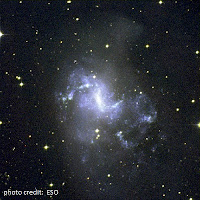 The Topsy Turvy galaxy is relatively close to our own Milky Way, being some 13 million light years from us.  As a result, an OIII filter can also be used on 1313 to bring out the H2 regions.  Unfortunately for me this night, high cloud had started forming and obscuring 1313 by the time I was ready to use an OIII filter.

The less than ideal viewing conditions had me draw on all my observing experience to patiently tease out details from 1313.  And this battle made the experience with 1313 so much more memorable! 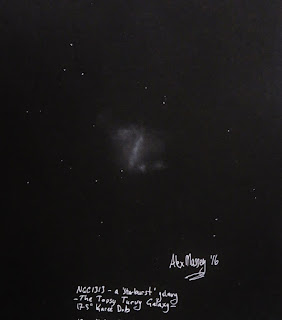 I hope you enjoy these pieces.

Alex.
Posted by Alexander Massey at 08:51