This is the third sketch completed over three consecutive nights.  And as often happens, the best was saved for last.

In November last year I did a sketch of Rimae Hippalus.  This area shows a series of what looks like co-centric riles.   When I did some research on this area after this Rimae Hippalus area, I came so see that there is a ‘mirror image’ set of riles to the north-west of Rimae Hippalus, Rimae Mersenius.  All of this happens along the shores of Mare Humorum.

As it turns out, this is no coincidence.   Both sets of riles are all related.  They are the resulting massive fracture lines that were formed when an enormous rock slammed into the Moon that formed Mare Humorum.  Both these rile systems are the fracture lines formed when the thin crust was smashed, much like the fracturing that forms when a stone or bullet slams into reinforced glass.  The terrible destructive force of that collision not only resulted in the crater being flooded by lava, but much of the resulting riles were also partially flooded.

Mare Humorum also has other treasures within its lava fields.  A pyroclastic deposit sits on the southern edge.  These areas are ancient remains of volcanic activity on the Moon!  And just west of this long extinct volcano is another volcanic anomaly, a dome.  Domes are volcanos that force their way to the surface, but not quite rupturing through.  Instead there is a ‘dome’ formed as the pressure from underneath pushed up causing a blister-like effect.  While doing this sketch, I noticed an odd ‘mountian’ close to the south western shore, very much out of place as it is well inside the lava fields.  It turns out that this ‘mountain’ is one such dome!

This entire area makes for magnificent examination.  This particular night turned out to have sensational seeing conditions.  This allowed me so reach the best resolution I’ve been able to achieve for over a year, with details as small as 2km in diameter.

However, the sensation that is this area is not limited to the history of rile system.  The crater Gassendi contains an astonishing series of riles within its floor.  The floor of Gassendi is a partially flooded one as the central peak of the crater is still visible.  But the resulting lava field is criss-crossed with a maze of riles.  Their curious structure could well be the result of collapsed lava tunnels.  However I am not convinced as yet that this is the case as these riles are over 3km wide.

Whatever the origin of this valley system, it makes for a very pretty filigree pattern inside Gassendi. 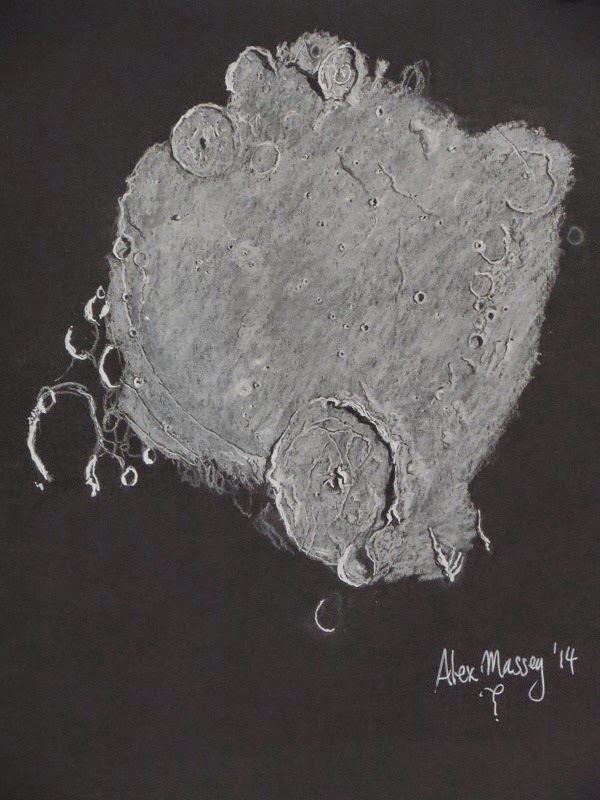 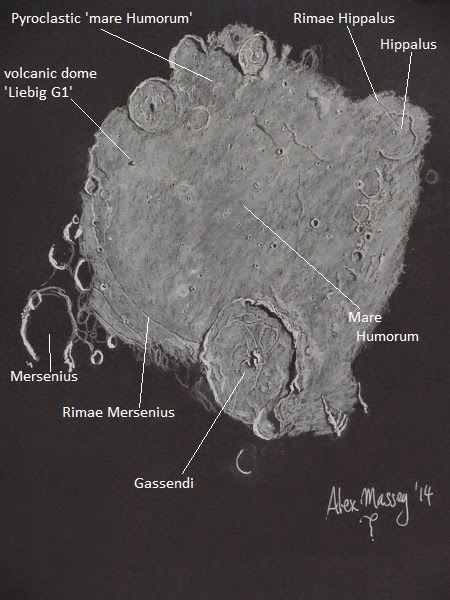 Below is the sketch of Rimae Hippalus, done in November last year, which is off the south-east edge of Mare Humorum, showing the rile system that reciprocates those pictured above.  You will see the crater Hippalus in both sketches that gives the reference point between both pieces. 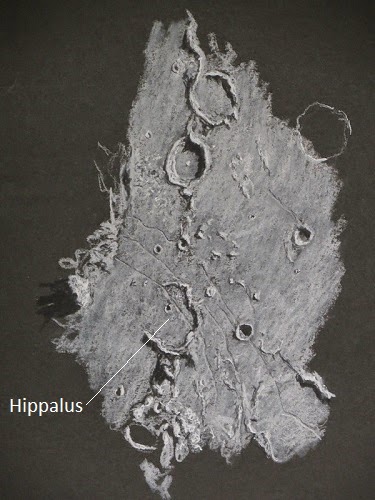 Posted by Alexander Massey at 20:12