Well, it’s taken close to a year, but I’ve finally managed to complete this HUGE sketch of the Large Magellanic Cloud for Prof. Renée James!  AND I found a system that helps keep my paper DRY during dewy nights!

First the weather conspired to prevent any chance of an early completion, by which time the LMC season had finished.  I had to wait until November last year for the new LMC season to begin, and the weather AGAIN delayed any chance of a favourable sketching night until two weeks ago.  I had left the sketch last year with the majority of the nebulosity laid down.  I then had the opportunity in mid-January for two crystal clear nights in which to complete the task.

If you recall, I had constructed a sketching rig especially for this size sheet.  The size of the sheet I used with this sketch measures 510mm X 635mm.  To the top of this rig I attached a pair of 100mm fans which I connected in series and runs on 12V.  I attached the fans more only because I had them and I thought I had nothing to lose if I try this idea.  On the second night of the sketch, conditions were very clear, but the easterly breeze that was blowing in from the coast meant that dew was forming a couple of hours after sunset, and my paper was beginning to dampen.  So I turned on the fans.  To my great surprise, the fans blew dry the damp and kept the paper bone dry the whole time I was sketching, while everything around us was getting soaked with dew! 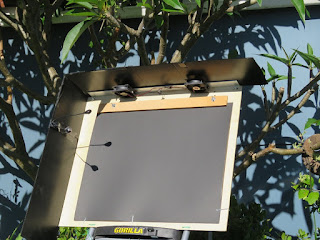 I am absolutely overjoyed at this dew control find!  Sketching in dewy conditions has always been a problem for me, and I just abandoned the exercise as it is impossible to work with damp paper.  This system that I rigged up on a dumb whim of speculation proved to be the champion I needed to keep my paper dry and me working!  If it were not for this sketch, I would never have found this solution.  Thank you Renée!

As I had the fans connected in series, each fan was effectively running on 6V, and their spin velocity was lower than if they were running on 12V.  Yet this air flow was plenty to dry off the paper and keep it dry.  Connecting the fans in parallel would give me greater air flow, which could be advantageous when dew is very heavy, but at the same time, if dew is this heavy transparency would also be greatly diminished and less than ideal visibility.  But it is something to consider and explore.

The sketch I have to say I am greatly relieved that it is done.  The sketch presented serval technical challenges that I had to constantly keep on top of.  The scope I used was a 100mm f/5 achromatic refractor with a 30mm 82˚ eyepiece giving 17X magnification, and a true field of view of 5˚.  The LMC measures some 12˚ X 12˚, no less than 6 times the diameter of the full Moon, and nearly 3 times the true field of view given by my scope/eyepiece combination.  The single biggest challenge was maintaining the scale of the piece and the relative positions of the stars to each other.  Another challenge was keeping track of the different landmarks so I could position the different features in their correct position, stars and nebulosity the same.

There was another revelation that I found, though not as a result of this sketch, but of something else I’ve been thinking about – illumination of my work.

I REALLY dislike red light.  It is synonymous with astronomy the use of red light, but the reality is that the use of red light in astronomy is entirely a throwback to the old dark room days when red light was use to process black and white photographic prints.  The problem with red light is our human eyes are not great in making out detail when the only source is a feeble red light.  To make out any detail, such as reading a chart or finding something in your kit bag, the brilliance needs to be increased and increased and this begins to stuff up your night vision.  I for one really struggle to read my charts under red light, and my smartphone I run with the full colour display, not the “red light display”, as it is impossible to effectively read a dimly illuminated red coloured screen.  Red is a lousy colour for our human eyes to register contrast with.

Yet, if we slightly shorten the wavelength of the light we are using, we can reduce the brilliance of the light, gain a marked improvement in contrast when reading, and not compromise our dark adaptation – this was the thinking I had, and there was only one way to prove this, by trying it out.

The size of this LMC sketch meant that I was positioned further away from the paper than I would be otherwise.  Making out the pinpoints of the stars I was laying down with red light was impossible to see – all because our eyes are poor in making out contrast under red light.  I had no choice but to try out the amber light.

What a difference it made, instantly!  These amber LEDs are less brilliant than the red ones of the lamp I use for my sketching.  Yet I was able to easily and clearly make out EVERY pinpoint I was marking on the paper.  As for my dark adaptation and perception through the eyepiece?  No issues whatsoever!  I experienced no diminished dark adaptation at all.  Instead, because the light I’m using is now less brilliant, I have noticed my eyes are less stunned, and this only improves my seeing.

I will be writing a separate blog entry about the use of orange and amber lights.  There I will discuss in more detail the problems of red light, and the improvements that there are to gain by changing our mindset of “red lights only in astro” to instead a mindset that better takes into consideration our HUMAN eyes and the ways that we can better work with them instead of against them.

Once the work out in the field was completed, at home in the light of day I tidied up the sketch and touched up the piece to add those infinitely tiny and impossible to individually lay down tiniest of stars that as a whole lend their light to the overall visual appearance of the LMC.  I used the same “machine gun” device I use with globular clusters to give the necessary lift and life to the LMC.  Without these the sketch remains flat and lacking the necessary brilliance seen through the eyepiece.  I’ve added a close up of the bar and Tarantula nebula section to show this detail that the whole of sketch photo just cannot reveal.

So, here it is.  My rendition of one of our closest intergalactic neighbours, the Large Magellanic Cloud 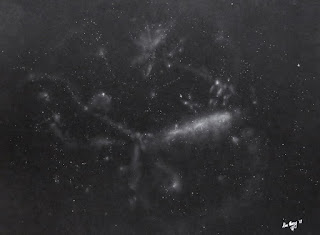 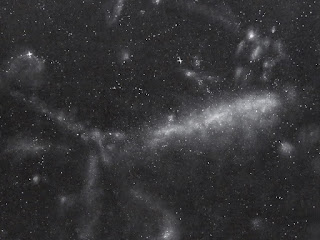 Close up photo of the bar and Tarantula Nebula area showing the fainter machine-gunned stars that give the sketch the necessary lift and life seen through the eyepiece.

A final revelation came to me about the LMC while I was examining a photo of it by Marco Lorenzi.  A fantastic resource about the Magellanic Clouds is the brilliant website Clouds of Magellan:

It contains very detailed charts of these galaxies, and offers other resources such as links and even sketches of the Clouds and of objects contained within.

The LMC is classed as a dwarf barred spiral galaxy.  The bar is very conspicuous when viewing it naked eye from a dark site.  The arms are however not noticeable, instead we see these as lobes on either side of the bar.  Even the majority of photographs fail to capture the structure of the arms, instead the over processing of the photograph washes out any trace.  Yet I noticed something very special about Marco’s photo when I was comparing it to my sketch.  The arms of the LMC are actually visible in both Marco’s photo AND my sketch! 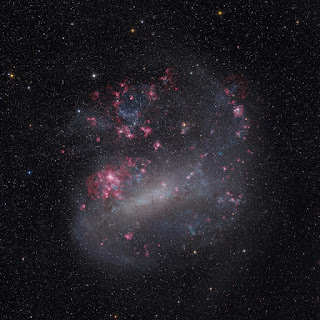 What is additionally revealed here is that the arms are not perfectly symmetrical, as would be expected, because of the significant influence of the gravitational tidal pull of the Milky Way on the LMC. 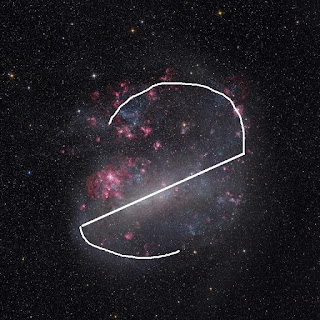 Yes, there is a magnificent barred spiral galaxy right over our heads, with two sweeping arms that wrap themselves around the whole structure.  Yet, while most of us may know of the spiral classification of the LMC, very few of us are actually aware that of its true magnificent structure, mainly because of over processed photographs, and of very few sketches of the whole galaxy.  Marco’s photo is orientated in the same direction of rotation as we see the LMC directly overhead.  The LMC is rotating in a clockwise direction when you view it naked eye.  Due to the left-to-right flip of the image with a refractor, the LMC in my sketch it rotating anti-clockwise.

You will find Parts I and II of this project in the links below:

This sketch has been one big undertaking.  From the start I was aware I had to do a lot of prep work to get to terms with the size and complexity of the LMC.  From a new sketching rig to accommodate the larger sheet, to the provision of a dew control system (if initially only experimental, but ultimately successful), and the need to adopt a different colour of illumination.  Then there were the technical challenges out in the field beside the eyepiece and the challenges crappy weather posed.  Finally the revelation of the true whole appearance of the LMC above our heads.

I sincerely hope that this sketch, and my experiences that came with it, serve to INSPIRE you, not intimidate.  I hope to inspire you to pick up a pencil.  Inspire you to not be shy about tackling the seemingly impossible.  And to inspire you to challenge yourself and explore different ways of thinking not only about sketching, but of how we go about doing our astro thing in the dark.

Posted by Alexander Massey at 14:07