It has been a miserable run of poor weather each and every new Moon weekend for so many months.  Finally the streak has broken, and I was able to achieve my first DSO sketch in as many months.

My observing buddies and I have also been looking for a new observation site ever since the passing of my good friend Rod Hay meant we lost access to Katoomba Airfield.  One location we found we lost due to regeneration works by National Parks.  I visited other potential sites, and for various reasons I had to discount them – difficult access, restricted horizon due to trees, location being contaminated by dumped rubbish, and at one fabulous location, feral dogs being a very dangerous problem!

During all this time, I’ve also been busy asking as many people as I could about either using their big fields by our little band of astronomers, or if they knew of someone who may be able to help.  The greatest difficulty has been finding a location that provided as many of the conditions that are best suited to astronomy.  After many months, a knight in shining armour has finally appeared.  We have been granted access to a fabulously big field out on the Shipley Plateau in Blackheath (in the Blue Mountains).  This new site is only a little further out from the Airfield, and is 100m higher in elevation.  The horizon is astonishingly good, with the tree line at least 100m in all directions from where we set up our gear.

As an added bonus, as the sun begins to set, the local kangaroos emerge from the surrounding bush to graze on the turf on the lush field.  As I entered the site, I was greeted by some 50 roos grazing and enjoying the last rays of the afternoon sun. 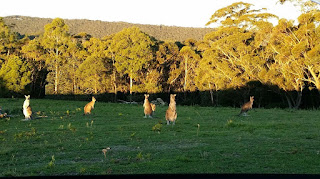 The roos remained on the field all night, keeping us company, though they kept their distance.

I had changed the entire secondary mirror holder and spider of my 17.5” dob.  I was never very happy with the spider and holder that I repurposed from the Odyssey 2, a Novak spider.  The vanes were too soft, yielding too easily , and the collimation screws were too difficult to access and adjust, requiring a screwdriver to do so!  As I also build telescopes, I had enough of the troublesome old Novak secondary arrangement and made my own.  What a brilliant improvement!  I installed my own dew heater to the secondary mirror along with an integrated wiring arrangement that connects to a 12V battery that’s fixed to the mirror box, which provides additional ballast for the heavier eyepieces I tend to use now.  First light with this new arrangement took a little bit of tinkering to get going, and once it was up and running, my planning proved to be the improvement that it needed!

I have wanted to sketch the lovely galaxy NGC 4945 for some time.  I still recall my first view of 4945, and I was staggered to see how detailed it has.   What makes 4945 special is not just the galaxy itself, but the theatre that the surroundings give to the view.

For being an edge-on spiral galaxy, 4945 is far from displaying an orthodox edge-on appearance.  The southwestern edge of 4945 (top left edge in the sketch) shows as a glowing leading edge.  While the glow is an artefact of the galaxy itself, the glow here seems to come as a reflection from a bright star immediately to the south.  The effect is quite striking.

Dark nebulosity from within 4945 carves a streak across the southeast edge, which curls in onto the middle, resembling the ball head of a femur bone.  The rest of the galaxy has a mottled appearance, and the overall effect really is of an elongated jumbled glowing mess.  Far from the more typical single dusty line that cuts across the middle of other edge-on spirals.

The odd appearance of 4945 is further heightened by being located behind one of the arms of the Milky Way.  If 4945 was located in an area of less dense stellar concentration, the background would be significantly darker.  But that 4945 sits behind a curtain of stars, the background is ablaze itself.  Yes, there are many stars that can be individually made out, there are so, so many unseen stars that as a whole lend their shine to the overall glow of the background.  The amount of dust and molecular gas that lies in front of 4945 dampens its glow by at least one whole magnitude. 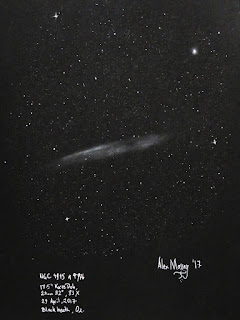 This last aspect, the background glow, made for a real challenge on how to depict it.  I laid down as many of the individual stars as practical, but the background really needed some sort of treatment.   A dusting of soft pastel with a big soft brush I felt was not the right technique here.  The tool that I resorted to was to “machine gun” the entire field, just as I would when finishing off a globular cluster.  What this does is allows for some of that “undefined directly, but define by averted vision” effect, and structure to a mottled effect can also be achieved, and adds a little more solid brilliance to the background glow as can be seen through the eyepiece. 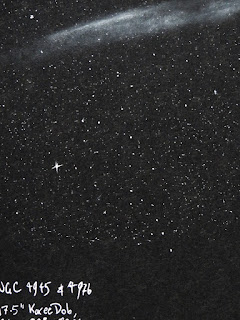 The above close up section was adjusted to accentuate those many hundreds (if not thousands) of tiny and oh-so-soft pinpoints I machine-gunned, and the stark difference between the glowing background and what would be a starless background.

If you would like to see what I mean by "machine gunning" with a soft pastel, have a look through my tutorial video on the Mellish Technique I use:

NGC 4945 is one of the closest big galaxies to our own.  A seyfert galaxy (very active core), and one of the twelve “Council of Giants”.  This groovy title comes from a group of giant galaxies that surrounds the Local Group.  Other members of this Council include the Sculptor galaxy (NGC 253), Centaurus A and M81 and M83.  4945 is also called the cousin of the Milky Way as its size and mass is very similar to that of the Milky Way.  The main differences between the two is the larger amount of stellar creation in 4945 and its very active core.

This was a most satisfying piece, with lovely optical illusions, gorgeous details, and an electric background that challenged my thinking on how to depict it.

Posted by Alexander Massey at 00:32