Tricking up rigidity on a DIY wedge

A few years ago I salvaged an old set of SCT forks that was about to be trashed.  The RA motor still worked, and its handset still controlled the RA rate.  I realised that this old fork mount would be perfect as a video astronomy rig.  So I turned my DIY hand to making a wedge to suit. 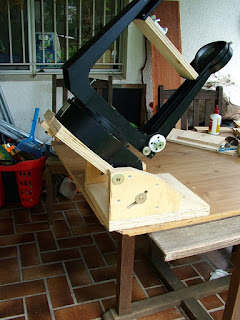 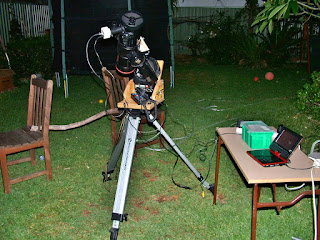 For my purposes, my immediate design appeared to be fine.  With sketching being my primary niche in astro, and at the time using another SCT, I never really paid much attention to the consistent error in alignment that the mount had.  No matter how accurately I set the wedge to my latitude, and no matter how much care I took with my rustic alignment, there was a persistent misalignment that saw the object drift out from the FOV.

I recently bought a brand new SCT OTA that I coupled to these old forks.  When I coupled the scope to the wedge, I noticed something shocking!  Something that I should have been aware of and stopped from occurring when I built the wedge – FLEX!!! 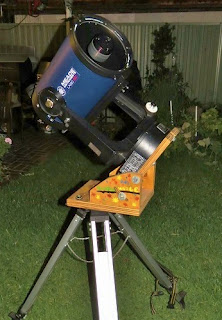 This explained the consistent misalignment of the video rig!

But how to fix this?

A pair of aluminium angle brackets placed along the length of the mounting platform.

The mechanical properties offered by the brackets acts much like an RSJ bar (I bar).  And with using just four screws to fix the brackets, the bracket/platform arrangement acts just like a laminated system, increasing the rigidity of the system. 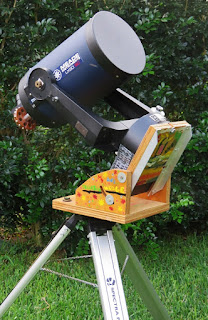 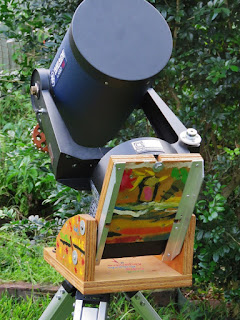 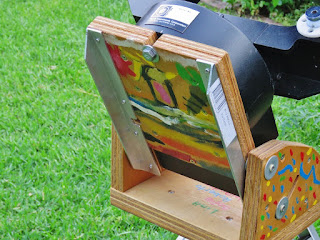 Over the weekend I tested the pimped wedge.  When I coupled the mount to the wedge I cannot say I noticed any flex in the platform.  With the magnification on the scope at 250X, there was only the most minor misalignment noticeable that despite my rough and ready alignment of the wedge kept Jupiter in the FOV for a couple of hours.

Flex problem 95% solved!  Any further improvement to the remaining flex will mean rebuilding the whole wedge - something I have not totally discounted as this pine plywood can be improved upon that will further improve rigidity, the new design would reduce the length of the unsupported mounting platform, and the wedge bracing would also be more centred over the tripod.  All of these are weak points in the current wedge.

Now for some clear skies for a sketch or two!

Alex.
Posted by Alexander Massey at 22:05