One of Murphy’s Laws states that “If something can go wrong, then it will”.

So it seemed that this was to be the eventuality of a perfect start to my night up in the Blue Mountains, when mist, fog and clouds started rolling in in turn after sunset.

Four mates and I arrived at sunset at Mt Blackheath Lookout.  There’s a take-off ramp for hang gliders and paragliders, and a couple a paragliders were taking advantage of the last of the day’s thermal currents with some last minute flying.  I always find it exhilarating how they pull on the ropes, the blade obediently puffs up, and after a little run up the glider and pilot are lifted into the quiet sky.  And to see a brace of gliders’ silhouette against the orange setting sun, and floating over a green valley, gorgeous. 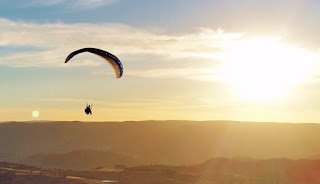 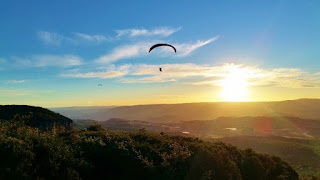 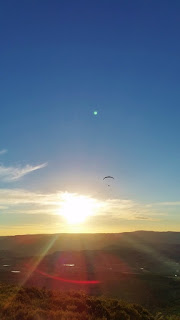 When we arrived, the wind was firm and from the west.  I thought that the easterly change that was forecast would have no chance against it.  No sooner did the sun set that there was a sudden change in wind direction, and the warm westerly was sent packing by a roaring easterly.  I have to say that the change was spectacular.

Unfortunately the change meant that the clear sky would cloud out soon – Easterly winds come from the coast, so they are moisture laden, and when they encounter the mountain range, clouds form as the moist air climbs up the mountain range.  The moisture content was very significant as mist soon surrounded us, meaning that if I started a sketch, the paper would quickly absorb the moisture, regardless of any measures I had taken to prevent this from happening.

The three hours of clear dark sky that we had was invaluable though.  I had taken two telescopes for the purpose of sketching the Large Magellanic Cloud (LMC).  An 80mm f/5 achromat, and a 100mm f/5 achromat.  With the LMC being so large (over 12° in its largest dimension), I was not sure which would be the best scope to use.  The 80mm gives me a 6° true field of view with the appropriate eyepiece.  But the image is not as detailed as that provided by the 100mm refractor, despite the larger scope giving a smaller true field of view of 5°.

So the dilemma for me was which instrument.  Large field of view and less detailed, or smaller field of view and more detailed.  So without the pressure of having to produce an actual piece (I made the decision that this night was not the appropriate one for a sketch), I was able to take my time with each telescope in turn to find out what each actually has to offer.  Which of the two instruments I would settle on using.

So, I settled on the 100mm.  The image it gives is just so much more appealing, that despite the additional detail, it just shows so much more of the LMC that I feel compelled to lay down on paper everything it has to offer, and not settle for less, even if it means an “easier” time for me.

Ok, I now have the telescope.  But this still left the task of how to undertake such a large piece.  I have a new extra large easel which I haven’t initiated as yet, nor any experience with sketching on such a large sheet.  I described the new easel in my previous blog post. 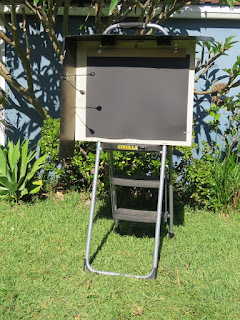 The next day at home an idea came to me.  The inspiration coming from the Old Masters who undertook a series of study works before tackling the actual piece.  This approach allows for many different technical and composition issues to be sorted.  Very often, the work behind these study works is greater than the time and effort involved in the final work.

Another problem next presented itself.  Finding photographs of the LMC is easy.  Manipulating those photos so they more closely resembled how I saw the LMC is easy enough to do too.  But how to reproduce the smaller field of view of the scope compared to the size of the galaxy, and so give me an idea of handling the scope and doing the sketch?   The solution was surprisingly very low tech.  A sheet of dark card with a hole cut out of it, and scaling the image of the LMC on the computer screen to match that seen though the scope.  As the sketch develops, I move the background image and/or the mask to allow me to work on other sections of the LMC as I go. 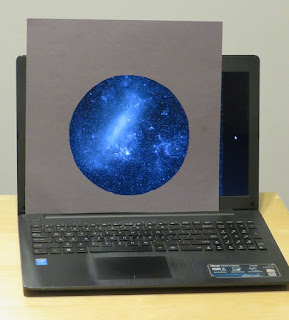 I’ve since been working on a series of study sketches.  This has been a good journey to undertake.  It has presented me with several technical aspects I had not anticipated, and allowed me to consider ways to deal with them.  All that’s left now is to tackle the LMC out in the field.

The main thing I want to convey is not to expect to undertake a sketch out in the field without having done some practice in the cool light of day.  It is invaluable to become familiar with your media, how to manipulate it, what different brush strokes do, and how different objects present different challenges and how to develop a technique that best works for you.  No athlete takes to the field without practice/training.  Surgeons do not undertake complex surgery without gaining experience.  Artists are no different when it comes to developing their technique and familiarity with their tools and media.  Don’t think that practice is cheating.  The only cheating that happens is to yourself as you won’t be producing work to your fullest potential.

Alex.
Posted by Alexander Massey at 09:29