I had the opportunity to visit the great star party that is the Queensland Astrofest for the first weekend in August.  I had a great time up there, meeting fantastic folks, and sponsored the event through Gondwana Telescopes, an enterprise of mine.

The trip up started not so well.  My family had all been sick with nasty colds the week before, and I was trying just about everything possible to avoid also coming down with a cold – I’m crook for a fortnight if I get sick.  Everything was going well until the morning of leaving home when I woke up with a sore throat, stuffy nose, and feeling rather miserable instead of excited.  Oh, well…  Do what we can, eh.

I managed to get two gorgeous clear nights.  The second night I hosted a Sky Tour for those folks who were new to astronomy.  I love doing these outreach events, sharing my passion for the night sky, and show to people that astronomy is not all about high level science, but allows people to take their involvement in things astro to as far or complex as they want.

A good friend, Ken Wishaw, also took a photo of me one night while I sketched.  Below is the lovely picture he took.  Immediately above my sketch pad you can see Antares and Saturn, and the body of Scorpio twisting up towards the upper left.  And just above Saturn you can see the Horse of Sagittarius dark nebulosity.  I can count at least half a dozen deep sky objects that this photo of around 30 second exposure picked up.  Thanks for the photo Ken – I now have it as the background image on my computer! J 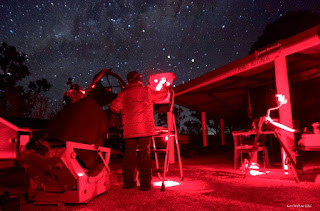 Ken’s pic was taken while I was doing the third sketch at Astrofest, that of the Lagoon Nebula, so I’ll expand upon that sketch later on.

Normally I don’t make plans for a sketching program for an evening.  Usually I’ll have some idea in my head about what’s up for a given night, and sketch following how the night pans out.  However for Astrofest I went with a program of objects that I really wanted to sketch.  I went as far as noting in which order to visit them depending on the timing of the evening.  Given that the first night started overcast with the sky clearing around 9pm, and the second night I conducted the sky tour, the first part of my program wasn’t able to be fulfilled.  And then with the miserable cold I was now also sporting, completing three of the remaining six programed targets, I was pleased with the outcome.  Particularly considering the time a couple of these pieces took.

The first night I managed two sketches.  The first of these was the Helix nebula.  In my 17.5” scope, it is a surprisingly large and bright planetary nebula.  At first is looks a bit like a ring with a hollow that is a little less brilliant than its circumference.  But as time goes on with examining the Helix, subtle details begin to emerge, such as the almost rhomboid overall shape it has, the textured ring with its jagged spiral ends, some of its soft extensions, and its little central star.  It is almost bizarre to think that it is no longer a star at the core of this nebulosity, but the core of a one-time star, with the bulk of its material having been blow out into outer space like a giant smoky balloon.  What once lay hidden from view for billions of years, is now exposed and due to slowly fade away, and set to exist for all eternity eventually as black, cold and super-dense lump of a dead star’s heart. 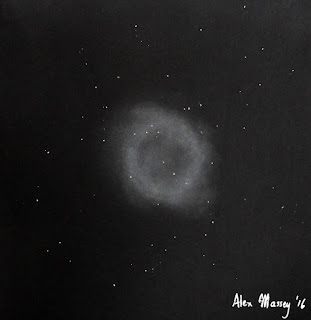 The second sketch for the night was the mighty Andromeda Galaxy.  Alas for us here in Australia, Andromeda is never very high in the sky for us.  And a good view of it really demands good transparency to have any chance of pulling out details.  Fortunately, this evening provided really good transparency, and an amazing amount of detail was possible to observe, and the longer my sketch went on, the more detail and the further and further out the monster extended beyond its core.

I recently asked on an astronomy forum about the HII regions within Andromeda, and how come they were not anywhere as easy to view as those within M33 & M83.  The reply I got from (JT) was not what I expected, and astonishing.  Despite the significant tidal influence exhorted on M31 by its two companion galaxies, M31 is relatively poor in star forming regions.  Much of the free gas and dust capable of star formation is close to exhausted, so it is not as rich with massive HII regions.  And those HII regions that do exist are small in size, and greatly obscured by the dust within the spiral arms.

Also mentioned was the single largest and brightest star cloud within Andromeda, NGC 206.  Often wrongly labelled as an HII region, it is essentially just a massive star cloud now, with no HII areas visible to visual examination of the cloud.  Attempt to spot NGC 206, and using a blinking paddle to try to spot HII regions within it and the rest of M31 would be on the cards.

The image of M31 was just staggering.  Just about as good as it gets for us here in Oz.  It is curious how Andromeda slowly reveals here treasures, demanding your time and attention in order to be given the honour to view them.  Be brief with her, and she is fickle.  Take your time, caress her and pay her the attention that she deserves, and she richly rewards you.  This way she shows first her mottled centre, with her large, almost stellar core.  Then comes the first layer of extensions past her centre, with good transparency revealing the dusty lanes in the foreground.  She then begins to show the two outer lobes, which are uneven in brilliance, one being more diffuse than the other.  Next comes a glimpse of NGC 206 if you are really paying attention.  And finally, when she is convinced of your sincerity, she shows off her faintest extensions, soft like the breath of an angle, and stunningly long – Andromeda is one very big spectacle.

NGC 206 appears in the sketch as a brighter patch in the left lobe.  I was absolutely thrilled to be able to spot this feature.  I felt like I was at a Burlesque show, catching fleeting glimpses of seductive details.  I used both OIII and UHC type filters to try to tease out any HII details, but none stood out, as was mentioned to me.

This sketch shows approximately a 3° true field of view, which is more than twice the field visible in the eyepiece I used, 30mm 82° Explore Scientific. 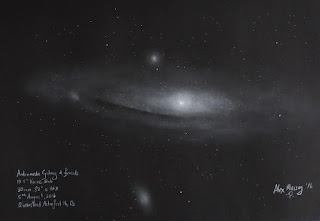 The final sketch was done the following night.  Here I revisited the Lagoon Nebula that I sketched last month.  There were some elements with which I was not too happy about last month, and following the introduction to titanium dioxide pigment powder, I was most keen to revisit The Lagoon.

Transparency was very good this night too.  One major difference between this visit to the Lagoon to the last was I was not as fatigued as the last time.  This had a major effect on the detail I was able to see and lay down reliably.

As the sketch progressed, I became aware of how long it was taking to lay down the nebulosity.  The difficulty was not the brighter areas, but the soft outer extensions that kept on extending further and further out the longer I examined the Lagoon.  At one point I caught myself exclaiming “Oh, when the blazes are you going to stop!”

But I was in for a surprise that made the three hours spent with the Lagoon very much worthwhile.  While working on the details of the dark lane, I started to pick up hints of another dark feature.  When I looked a little closer, lo and behold, it was a Bok globule!  Sensational!

By the time I finished, I was well and truly spent.  All that was left to do was to put the big scope to bed for the night and turn in myself.  A long and satisfying second night.  And room for improvement. 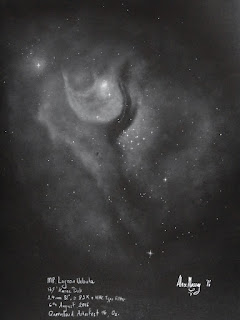 Posted by Alexander Massey at 21:49