Beaten up shore side, and remembering a friend

This has not be the kindest year for myself so far this year with astronomy.  This weekend was my first good New Moon weekend since January.  Also the last couple of months from home, the atmosphere has been particularly turbulent with even the most modest of magnification showing a shimmering image, making sketching the Moon and Sun ney impossible.

On a more grave part, my good friend, Rod Hay, was tragically killed in an airplane accident in February.  Rod was the manager of Katoomba Airfield, the location of my dark sky site.  With Rod’s death, access to the Airfield to EVERYONE has had to be stopped until the murky business of insurance and new lease arrangements are determined.  Rod was a very experienced pilot & flying instructor, and welcoming of anyone who cared to show interest in flying and his dear Airfield.  One of Rod’s biggest boasts was that he had more students become commercial pilots than any other flying instructor!  Over the five years I had known Rod, my relationship with him and his partner grew beyond astronomy.  My little son and I came to have a little end of year ritual with just the two of us spending an evening up at the Airfield doing “boy stuff”.  My first hearing of Rod’s passing was from the TV news on the Sunday morning following the disappearance of his aircraft.  While no name was given of the missing pilot, other than that the pilot was a Katoomba local, sent a deathly shiver up my spine.  Tragically, it was Rod who was lost.

So, until the situation with the Airfield is settled, we as a group of astronomy friends have had to find a new home to exploit the night sky.  The trick has been to find a site that offers the unique set of parameters that made Katoomba Airfield such a fabulous location for astronomy:

·     *     Set high on a ridge, not in a valley – fog settles in a valley, leaving the ridge tops clear
·     *     Rocky or sandy ground, not turf – grass expels a lot of water during the night which becomes dew.  This can be just about eliminated by setting up on rocky terrain.  While there are measures by which to reduce the ill affects of dew on optics, if dew is not present from the start, then dew control measures may never need to be taken.
·      *    Away from the bane of light pollution.  Being set up high on a mountain greatly helps to as the reduced density of the atmosphere harbours less light pollution
·      *    Away from agricultural land as this has the same consequences as a grassy ground with dew

Katoomba Airfield offered all of these, plus it was a safe place for us to set up.  AND we were able to use the office which has a combustion heater which became the centre of the Universe on those freezing winter’s nights.

So, after a few months of pouring over maps, aerial photographs, asking people, councils, police and state authorities questions on possible locations, it looks like we have found a new home for our band of merry astronomers – roadside, deep within the western end of the Blue Mountains National Park, at Mount Victoria, on one of its higher peaks.  This almost barren ridgetop has a completely unobstructed 360° view of the horizon!  And as it turns out, this site has a gun-barrel view of the Sydney Harbour Bridge! some 92km away!  Holy cow!  Who would have thought that The Bridge would have been visible from so far away, and from the far side of the Great Dividing Range! 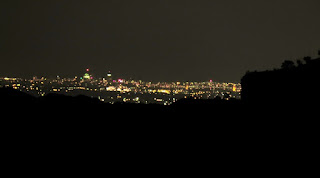 The Bridge and North Sydney buildings are visible from a tiny, tiny gap in the mountains.  The picture below shows the lumpy profile of Mt Banks in the east of the site.  The gap is a thin slither located off to the right of the shorter third peak of Mt Banks, and stopped by the yellow cliff face just beyond the right side of that same short third peak. 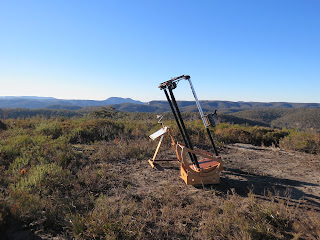 Wai Keen, one of the fellows who joined me at this new location, came up to take photos of the night sky.  Below is one of the lovely pieces he was happy for me to add to my blog.  It shows another mate who joined us, Mark, lying back enjoying the sky while he waited for his scope to take a photo.  I really like this composition,  What is also noteworthy of this photo is it shows what the sky looked like naked eye to us!  Brilliant!  Thanks for the photo Wai Keen :) 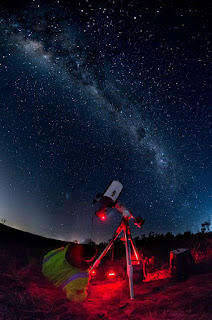 These photos were taken the first night we used this new location.

As things would be, when I arrived the sky was crystal clear.  On sunset, clouds rolled in from the west.  The next two hours were spent looking for holes in the clouds, and the holes slowly became larger and longer lasting until the full splendour of a totally unhindered sky came into view!  Magnificent!

I had hope to complete a few sketches this night.  The two first hours being lost to cloud meant that my initial plan went out the window.  Fatigue then set in, making concentrating and settling on a sketch difficult.  After a short sleep to refresh, I was ready to tackle a sketch.

I have sketched M8, the Lagoon Nebula, a few times over the years.  Yet never from a dark site.  What I didn’t anticipate was the level of complexity that The Lagoon shows from a dark site in a 17.5” scope.   Instead of being a flat glow, it is fibrous.  Instead of being tight and compact, it is enormously expansive and diffuse.  And instead of being a grey glow, it is bright with an almost electric blue tinge to it.  I also managed to pick up hints of a couple of the bok globules that inhabit M8.

This voyage over the Lagoon was a sobering experience in complexity.  It challenged my technical capability and acuity of examination.  I am not completely satisfied with this effort.  Don’t get me wrong, I’m not disappointed.  But I hope to revisit the Lagoon next month and have another shot at it – weather permitting. 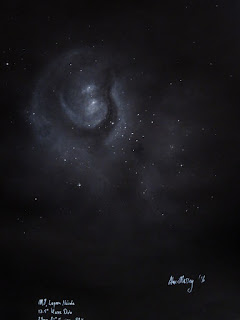 Alex.
Posted by Alexander Massey at 08:13