Unveiling the Veil Nebula, Part I

This last week I attended the Queensland Astrofest, held outside the village of Linville, some two hours west of Brisbane.  We were blessed with cloudless skies, and with fantastic transparency.  The quality of the transparency meant that objects that objects much easier to see and with better clarity.  And for objects that are close to the northern horizon, this is very significant for us located under our southern skies.

During the first night, I was pointed to the direction of the Veil nebula, which I had never seen, and in all honesty, had never considered as a plausible target from my southern location.  The first set of directions for the Veil Nebula proved to be a stunningly fortunate mistake.  In scanning for the Veil Nebula, I chanced upon the North America Nebula!  I was using my brand new 8” f/4 Kulali dob, which when coupled with an Explore Scientific 30mm 82° eyepiece, yields a sensational 3° True Field of View!  The entire North America nebula just managed to fit inside the field of view!  As tempted as I was to sketch it, and knowing that I would take around 2 hours to complete a sketch of it, I thought better of it as it would be disappearing behind some trees in around an hour’s time.

A better set of instructions was uttered to me to find the Veil, and then there was no mistak.

It was so bright and so detailed for an object very close to the northern horizon!  And it is so BIG!  The entire Veil circle just fit inside the True Field of View of this little scope.  The first sketch below depicts the view of the entire Veil as seen through this eyepiece/scope combination.

Again, the advantage of having a manual push-pull dob came into its own.  The amount of detail just kept getting richer and richer as the constant push-pull action keeps refreshing my vision and so allowing my eye to see fainter and fainter detail.  The remaining ‘gunsmoke-like’ of the cataclysmic supernova explosion is such an exquisite image.  Being so close to my northern horizon, the Veil must reveal so much more detail when it is viewed from a more favourable northern location.

It must also be kept in mind that the Veil Nebula sits smack bang in the middle of the band of the Milky Way galaxy.  The entire nebula is set upon a background carpet of the glow of the Milky Way.  A really exciting and exquisite view. 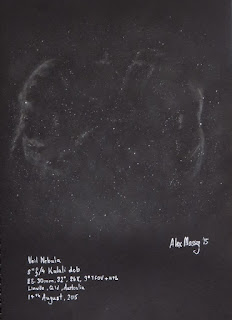 Posted by Alexander Massey at 22:29