The Moon – the target that keeps on giving.

This sketch is the third time I’ve visited the magnificent trio of craters Ptolemaeus, Alphonsus & Arzachel.  Each and every time this trio has given incredible new details & stories.

Much of the Moon’s details are readily visible – they just requires patience to identify.  Other details are fine & require not just patience, but a co-incidence with good stable atmospheric conditions.

The exercise in producing this piece revealed more about the forces that formed the lunar surface.  Many of these forces spell cataclysmic results if they are visited on Earth now.  Others are currently in play on Earth today, though extinguished on the Moon long, long ago.  My last examination of this trio show me how the appearance of craters can show the age of their features, thereby giving a time-line to their relative age/history.

Brief history in the rocks – The more a crater is lava filled/flooded, the older it is as the impact occurred when the Moon was hotter and its crust was thinner, so lava flowed readily to fill the resulting hole.  As the Moon cooled, and the crusted thickened, the lava flowed less readily, so these craters show less filling/flooding, with their central peaks still visible.  The latest age of the of the Moon sees craters with no lava flooding as the crust is too thick to allow lava to flow to the surface.  Today, the Moon is a nearly totally cold rock, so every impact is a ‘simple’ impact  – very recent research by Japanese scientists has revealed the very core of the Moon still maintains a small amount of residual heat.

Now, the really exciting part of this ancient lava activity is that these partially filled craters hold a bucket load of other details such as extinct volcanos, pyroclastic deposits (ash and dust fallout deposits), rilles that are river beds of lava flows, and other rilles that are extensive fracture lines produced by the massive subterranean magma pressure pushing up from below the solidified flooded crater floor, causing the solid lava floor to dome and fracture.  This is a common characteristic of these middle age craters.  Older craters like Ptolemaeus, rarely show this type of rille system.

This trio of craters show all these classic characteristics:  Ptolemaeus is a very ancient crater where the entire crater is flooded, with only a shallow rim remaining. 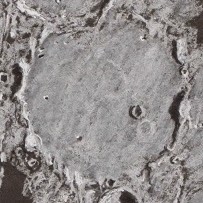 Alphonsus is younger than Ptolemaeus.  It’s floor is considerably flooded with just a small amount to the central peak visible.  As volcanic activity was still a common occurrence, Alphonsus has several volcanic peaks and pyroclastic deposits.  Its floor was also subjected to the subterranean magma pressures that  have created a series of rilles in its floor. 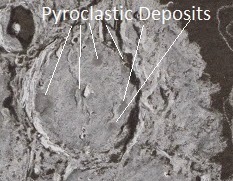 Arzachel is the youngest of the trio.  It is still a very old impact crater as its floor is flooded, but by the least amount of the three.  Volcanism was already not as active on the lunar surface so there are not volcanos in it.  However, subterranean magma pressure was still very much in play and these significant forces, and having no place to go such as volcanic vents, pushed very hard on the partially flooded floor and fractured it too. 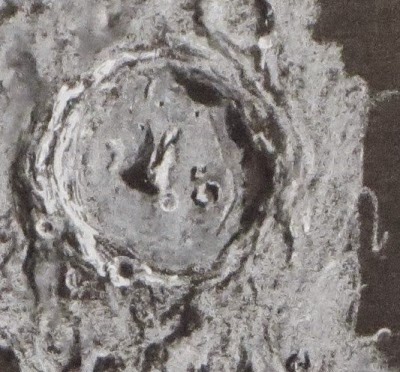 There is another set of crater features that are really special as they do not occur too often on the Moon.  ‘Catena’ is the Latin name for chain, and on the Moon these refers to a string or chain of craters.  These chains are formed by an asteroid or comet that has been smashed and its component fragments orbit the sun in a line following each other.  When they encounter the Moon, their impact is seen as a dotted line.  On either side of Ptolemaeus there are two such catena.  One on the left of the Ptolemaeus is Catena Davy, named after the crater Davy.  It is a challenging thin string of beads going east to west.  This chain can be a tease to find as the constituent craters are small, going from 1km to 3km.  The second set of catena is on the right side of Ptolemaeus, though I cannot find this catena’s name in the atlas’s at my disposal. 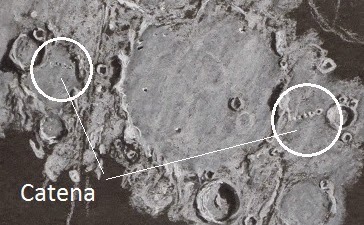 The area surrounding this trio also has several fault lines and rifts that are not expressly named.  Two of these sets of fault lines also straddle the left and right sides of Ptolemaeus, running parallel down to the north west.  Curious that these should not be named as they are quite striking and bold features. 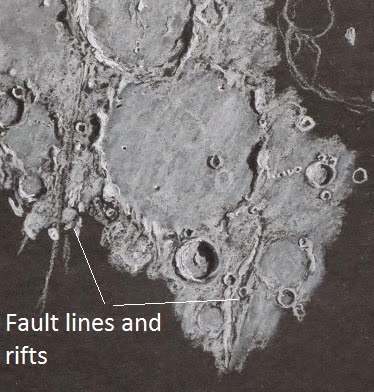 This visit to this prominent trio was one of my most exciting pieces to produce.  So much more detail was found this time than the previous two.  It is also the most expansive of the three sketches.  And a wonderful time was had. 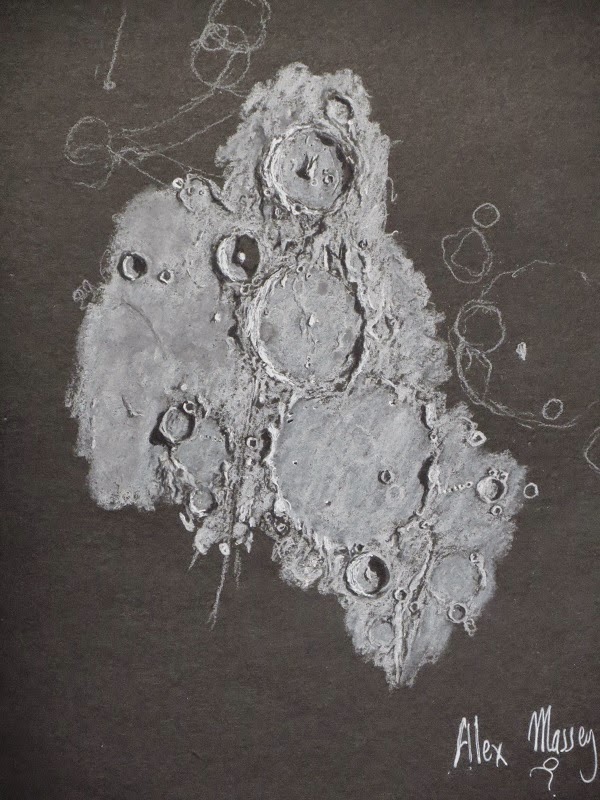 Posted by Alexander Massey at 19:00